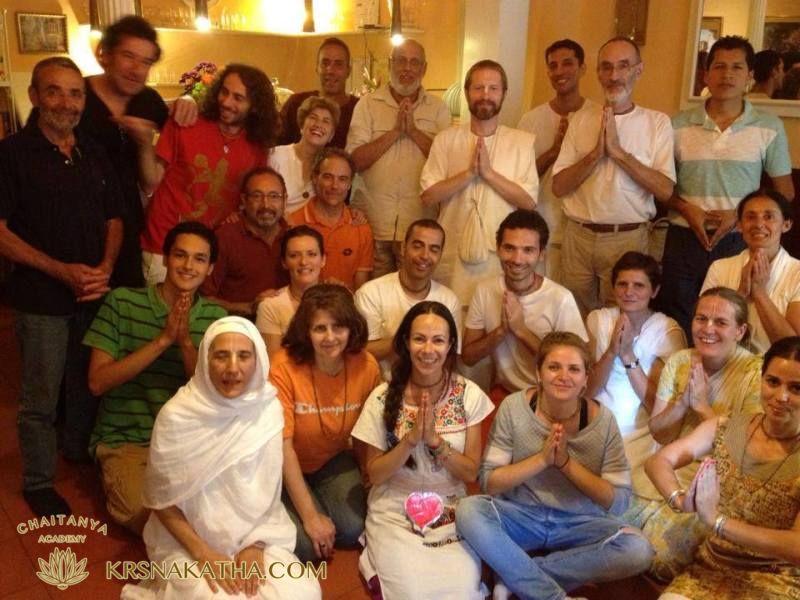 Our dear Srila Gurudeva, Sri Prem Prayojan Prabhu, out of his kindness is traveling from place to place to visit, inspire and instruct his devotees, friends and also new people on the path of bhakti.

We feel very blessed to have had his divine association during the last few days in Madrid.

Srila Gurudeva is not only an embodiment of divine transcendental love and knowledge but along with these qualities also come all the arts of devotion like drama and dance. As you might be knowing the Vrajabasis used to assemble in the evenings in Vrndavana to see the performances of Madhukantha and Snigdhakantha, which used to inspire them very much in their loving devotion for Sri Sri Radha-Krsna. In the same way Srila Gurudeva also inspires us to develop and practice these arts, which are very much uddhipana (stimulation) for bhakti. 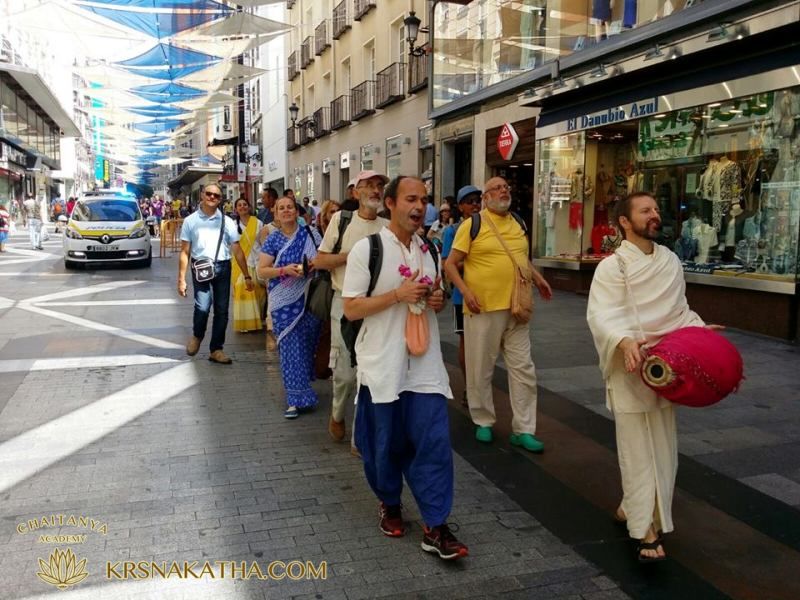 Srila Gurudeva nourished all the devotees with wonderful Hari-Katha and kirtana during these few days in Madrid. We learned about the psychology of desires, the importance of taking shelter of a bonafide Guru, that only with the conduct of humility and tolerance we will be able to chant the Holy Name continuously. Gurudeva explained in detail about four things, which should always be kept secret and why to do so. We forgot about the external world by listening to sweet pastimes, which happen in Vrndavana and know that by following the examples of Naciketa and Satyakama, two bonafide disciples described in the Upanishads we shall certainly attain perfection in life.

On Sunday we danced through the streets of Madrid chanting the Holy Name. This was a most pleasing activity not only to benefit so many people, who were wandering in the town, but also for our own soul by becoming an instrument of Sri Caitanya Mahaprabhus mission spreading the chanting of the divine names in every town and village, prithvite ache yata nagaradi grama sarvatra prachara haibe mora nama. Here we sincerely pray to Srila Gurudeva and Sri Caitanya Mahaprabhu to help us to become a worthy instrument, a vessel, which is capable of carrying and spreading this divine current of pure love.

A group of devotees who came all the way from Logrono to attend Srila Gurudevas festival have been blessed by receiving Harinama initiation and some other devotees are doing gurupada-asraya (taking shelter of the lotus feet of Sri Guru) and received Srila Gurudevas pranama-mantra.

The last day of the festival we keep in our hearts as moving out from the city we came to the countryside, to the Sierra, where we were surrounded by hills, trees, flowers, singing birds… Gurudeva announced on the day before:

“Tomorrow we will go out from the city of Mathura to the village, to Vrndavana!”

Indeed we enjoyed honoring prasadam outside in the garden under the trees and wandering through the hills, resting on a beautiful lake, being absorbed in chanting of the Maha-mantra and hearing Srila Gurudevas class explaining, that all the great sages in the past have gone through a stage of solitude in order to attain perfection, deeply absorbed in chanting to later come again into the public to share their divine realizations of God with the people of this world. 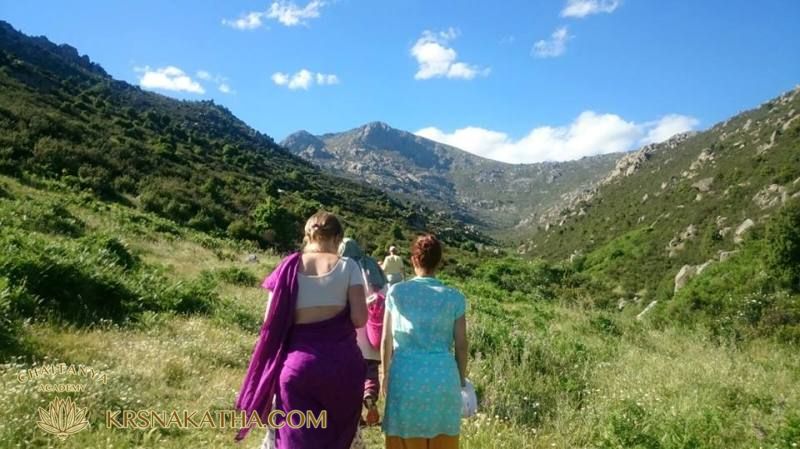 Gurudeva explained about Jesus Christ’s 40 days of fasting in the desert and resisting all the temptations, which the devil proposed to him. “Never trust your own mind, he is always wicked”, Gurudeva explained. 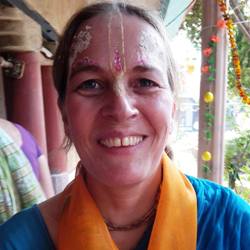