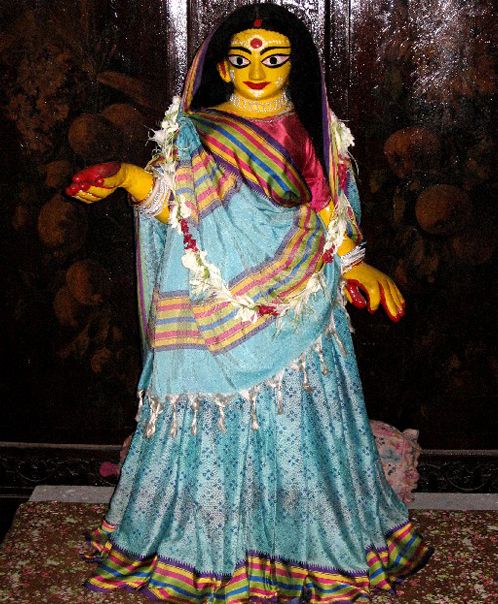 Balaram’s wives Varuni and Revati became Vasudha and Jahnavi, the two wives of Nityananda Prabhu, in Chaitanya-lila. Both of them were the daughters of Surya Das, who was as effulgent as the sun. He was Kakudman, the father of Revati, in his previous birth. According to another opinion, Jahnava was the incarnation of Ananga Mjari. Both these opinions are possible, as we have shown that more than one identity can be joined in associates of Chaitanya Mahaprabhu. (Gaura-ganoddesa-dipika 65-6)

Jahnava’s father was Surya Das Sarakhela. According to the Gaudiya Vaisnava Abhidhana, her mother’s name was Bhadravati. Surya Das’s Sripata is in the village of Saligrama, which is not far from Nabadwip, situated close to the Muragacha station on the Eastern Railway. Surya Das was the third son of Kamsari Mishra. His older brothers were Damodar and Jagannath, his younger brothers, Gauri Das, Krishna Das Sarakhela and Nrisingha Chaitanya.

Saligrama is not far from Nabadwip. Surya Das Pandit made his home there. He held an important post in the service of the king of Gauda, as a result of which he was given the title Sarakhela (‘commander’) and earned a large amount of money. Surya Das and his brothers were all very pure in their character and they had a spotless reputation. His virtues are innumerable. His daughters were Vasudha and Jahnava. (Bhakti-ratnakara 12.3875-8)

Surya Das Sarakhela and Krishna Das were brothers who both had great faith in Nityananda and were filled with love for Krishna. (Chaitanya Charitamrita 1.11.25)

Surya Das Sarakhela was a magnanimous devotee whose brother was Gauri Das Pandit. Gauri Das took his permission to come and live in Ambika on the banks of the Ganges. (Bhakti-ratnakara 7.330-1)

Narahari Chakravarti Thakur has written about Jahnava Devi’s holy life at length in his Bhakti-ratnakara. Every manifestation of Vishnu-tattva has three energies which are known as Sri, Bhu, and Nila or Lila. Nityananda Prabhu is also Vishnu-tattva and possesses these three energies. In the 12th Taranga of the Bhakti-ratnakara, Lord Nityananda’s wedding is described as taking place according to human custom. The essence of that description is as follows.

A certain kayastha named Krishna Das, the son of Harihora of Baragachi, a village near Saligrama, took the responsibility of seeking a wife for Nityananda Prabhu. A certain elderly Brahmin from Saligrama saw that Surya Das was worried about finding a suitable husband for his two daughters and made the following suggestion: “In the village of Ekacakra in Rarhadesa are a couple named Harai Pandit and Padmavati Devi. They were Vasudeva and Rohini in their previous lives in Krishna-lila. Balaram has become incarnate as their son, Nityananda. Nitai travelled to all the places of pilgrimage and performed many austerities and became a great scholar before coming to Nabadwip and becoming Chaitanya Mahaprabhu’s dearest associate. He is the eternal husband of your two daughters.”

In a dream, Surya Das also had a vision of Nityananda as Balaram with Vasudha and Jahnava standing to his left and right in their forms as Revati and Varuni. When Surya Das took the Brahmin’s advice seriously and offered the two girls to Nityananda’s lotus feet, Nityananda Prabhu mercifully gave him the same vision directly. Surya Das fainted in ecstasy.

He saw Vasudha and Jahnava as Varuni and Revati, whose forms were more effulgent than mountains of gold and kunkum. Standing to the left and right of Balaram, they were decorated in magnificent jewelry and bedecked in fine, colorful clothes. Nityananda revealed this magnificence to his devotee in order to give him joy, and Surya Das completely forgot himself in his ecstasy. (Bhakti-ratnakara 12.3908-10)

The adhivasa rituals on the eve of the wedding were conducted in the house of Krishna Das Sarakhela in Saligrama. All the Brahmins of Baragachi and Saligrama were present there.

The fortunate Surya Das Sarakhela gave his two daughters away to Nityananda Prabhu according to the religious rites and popular custom. (Bhakti-ratnakara 12.3983)

At Sachi Mata’s request, Nityananda Prabhu stayed for some time after his wedding in Shantipur before moving to Saptagram, where he stayed with Uddharan Datta, and then establishing a permanent residence at Khardaha on the banks of the Ganges.
Jahnava Devi herself had no sons, but Nityananda’s Sakti Vasudha Devi gave birth to Virabhadra (or Viracandra) Goswami and Ganga Devi, who are the incarnations of Ksirodakasayi Vishnu and the river Ganges, respectively. According to the Gaura-ganoddesa-dipika (69), Ganga Devi’s husband Madhavacharya is an incarnation of King Santanu.

Virabhadra Goswami was inundated with Jahnava Mata’s mercy, becoming her direct initiated disciple. Nityananda Das writes in his Prema-vilasa that when Virabhadra saw Jahnava in a four-armed form that his mind was changed and he decided to accept her as his diksha guru.
Without the mercy of Nityananda Prabhu’s energy Jahnava Devi, no one is able to cross over the ocean of material life, nor can one obtain the service of Nityananda Prabhu and enter into the loving service of his worshipable Gaurahari and Radha Krishna. Bhaktivinoda Thakur has written in his Kalyana-kalpa-taru:

O Jahnava Devi! Be merciful to this servant today. Deliver me from my pain and give me a place in the boat of your lotus feet so that I can be sure to cross over the ocean of birth and death. You are Nityananda’s energy, you are devotion to Krishna and my guru. Please give this servant the desire tree of your lotus feet. How numerous are the fallen souls that you have saved, so this fallen beggar seeks a place at your feet.

Jahnava was present when Narottama Das Thakur put on a great festival at Kheturi village to install the deities on Chaitanya Mahaprabhu’s appearance day. Indeed, the installation of the deities took place under her direction. She also supervised and personally participated in the cooking of the first offering and made the first offering to the deities. She served the prasad to the assembled mahantas.

Jahnava Isvari rose early that morning in great delight and took her bath and did her mantra meditation. Then she began to cook innumerable vegetable preparations with great enthusiasm. (Bhakti-ratnakara 10.686-7)

All of Chaitanya Mahaprabhu’s personal associates from Bengal were very happy to see Narottama Das. Jahnava Devi, the daughter of Surya Pandit and wife of Nityananda Prabhu, worshiped by the entire universe, expert in the distribution of the pearl of prema, was delighted to hear his name. Her joy increased when she observed his uncommon love for Krishna and his renunciation. Out of her mercy, she came to Kheturi, satisfying everyone by being present there and giving her darshan to all. How can a fallen person like myself fully describe the compassionate nature of Srimati Jahnava Devi. (Bhakti-ratnakara 1.429-34)

Jahnava Devi’s travels are described in the eleventh Taranga of Bhakti-ratnakara. On the road from Kheturi to Braj she stopped in a prosperous village where she delivered some atheistic unbelievers and criminals and bestowed Krishna-prema upon them. When she arrived in Vrindavan, she saw the samadhi of Gauri Das Pandit which moved her to tears. When in Vrindavan, the leaders of the Vaishnava community such as Jiva Goswami, Gopal Bhatta Goswami, Lokanatha Gosvami, Bhugarbha Goswami, Madhu Pandit, etc., all came to offer her their respectful greetings. Taking these leaders with her, she visited the principle temples of Vrindavan -- Madana Mohana, Govinda and Gopinath -- before going to Radha Kund. There she met Raghunath Das Goswami, who was engaged in constant chanting of the Holy Names, and whose body was emaciated by his austerities.

Jahnava remained in Radha Kund for three days engaged in bhajana. She heard the sound of Krishna’s flute while sitting on the banks of the tank and had a vision of Sri Krishna which overwhelmed her with waves of divine love. The ghat where Jahnava bathed and had this vision is today known as Sri Jahnava Ghat. She then took the company of Vaishnavas on a parikrama of Vraja-mandala. During this parikrama she heard Jiva Goswami discourse on Brhad-Bhagavatamrta.

After her visit to Braj, Jahnava returned to Gauda-desa where she visited numerous villages. She spent three or four days in Kheturi (Narottama Das’s home), some time in Budhuri (the home of Ramachandra Kaviraj in Murshidabad district), the place of Nityananda’s birth in Ekacakra (Birbhum), Katwa (where Mahaprabhu took sannyas and where she met Yadunandana Acharya), Jajigrama (Srinivas Acharya’s home village), Srikhanda (the home of Raghunandan Thakur, son of Narahari Sarkara Thakur), Nabadwip, Ambika, Saptagram (where she visited Uddharan Datta’s house) before finally returning to Khardaha. There she recounted the story of her entire voyage to Vasudha and Virabhadra Goswami.
By Jahnava Devi’s mercy, Nityananda’s dear associate Paramesvari Das Thakur was fortunate enough to see Gopinath united with Radharani in Vrindavan. When he returned to Khardaha and told what he had seen to Jahnava and Vasudha, Jahnava was overwhelmed with loving ecstasies. She instructed him to immediately go to the village of _~Atpur and to install deities of Radha and Gopinath there.

Jahnava Devi arranged for Virabhadra’s marriage to Yadunandana Acharya’s two daughters, Srimati and Narayani, both of whom became disciples of Jahnava.