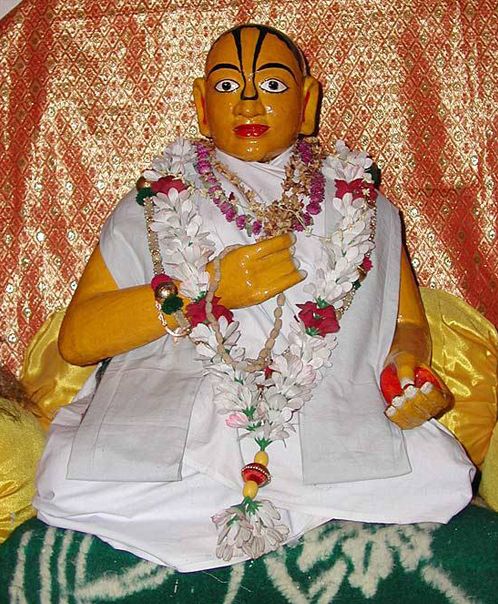 Gopal Guru Goswami was born in an Orissan Brahmin family. His father’s name was Murari Pandit. His mother’s name is unknown. While still a child, he had the opportunity to serve Mahaprabhu through Govinda, the Lord’s servant. His original name was Makaradhvaja Pandit, but Mahaprabhu used to affectionately call him Gopal. His name is found in neither the Chaitanya Charitamrita nor the Chaitanya Bhagavat.
He was initiated by Vakresvara Pandit, one of the Lord’s close associates living in Jagannath Puri. [FN. See vol. 1, chapter 16]

This is confirmed in the book Vakresvara-carita, where the following passage is found:

There are five branches in the lineage descending from Vakresvara Pandit--those coming from Chandrasekhara, Sankararanya Acharya, Govindananda, Devananda and Gopal Guru, whose qualities are beyond description.

From the book Guru-pranali which is published by the Radhakanta Math, we learn that Gopal Guru Goswami’s identity in Vraja-lila was as the sakhi Manjumedha.

How he got the name Gopal Guru

There is a legend surrounding the addition of the word guru to his name.

There was once a devotee in Puri who was particularly attached to the chanting of the Holy Names. As a matter of fact, the chanting had become automatic for him, so that his tongue muttered the names incessantly. One day Gopal Guru saw this devotee on his way to the toilet, holding his tongue between his fingers because he did not wish to chant the Holy Name while engaged in an impure act. Gopal Guru was just a lad, but he was able to understand why the devotee was doing this and he said to him, “What are you doing? Don’t you know that there are no regulations governing the time and place for chanting the Holy Name? One should chant the Name in all times and circumstances, pure or impure. If you were not able to chant while defecating, how would you be able to have an auspicious death, should death suddenly come upon him at that time?”
Mahaprabhu overheard Gopal sharing this wisdom with the Vaishnava and was very impressed and he announced to all his devotees that Gopal was doing the work of a guru. From that day on, the young Makaradhvaja Pandit was known as Gopal Guru. Because he both preached and practiced, he was factually acting as an acharya or guru.

It did not take long for his fame to spread through the Vaishnava world. Abhiram Thakur had the reputation of being able to verify whether a stone was a real Vishnusila or Salagrama sila by paying his obeisances to it. If not real, it would crack or turn into dust. Only a pure Vaishnava would be able to tolerate his obeisances, otherwise they could prove fatal. When the Vaishnavas heard that Abhiram Thakur had come to Puri to test Gopal Guru, they were anxious for the boy due to their affection for him. Mahaprabhu realized that everyone was troubled and so he placed his foot on Gopal’s forehead, thus creating the distinctive tilaka marking which is used by those in Gopal Guru’s spiritual lineage. Gopal was still frightened and sat in the Lord’s lap for protection. Thus Abhiram’s obeisances did him no harm.

The service of Radhakanta Deva

Maharaj Prataparudra’s father Purushottam Deva brought several deities back from Kanci with him after defeating that city’s king. Among these deities was the murti of Radhakanta. This deity was first placed in a small temple on the northwestern corner of Jagannath’s Chatrabhoga temple, but later, Prataparudra’s guru Kashi Mishra asked to be given the deity for his personal service. Kashi Mishra had bequeathed everything he possessed to Mahaprabhu as he had no children of his own. Mahaprabhu then gave the service of Radhakanta, his temple and the surrounding gardens, etc., to Gopal Guru. His guru, Vakresvara Pandit, himself never sat on the gadi, i.e., never acted as acharya, at Radhakanta Math. Rather, he stayed absorbed in kirtan and dancing in the company of Mahaprabhu.

The tithi marking Mahaprabhu’s bestowal of Radhakanta’s service on Gopal Guru is celebrated on the Sukla Dvadasi of Magh. On this day, he also gave him the post of first acharya of the Radhakanta Math and the occasion is marked annually by an abhishek of the present-day abbot of the Math.

Srila Bhaktivinoda Thakur has written the following about Gopal Guru Goswami: “Vakresvara Pandit’s disciple Gopal Guru Goswami is currently abbot of Mahaprabhu’s own math in the house of Kashi Mishra in Purushottam. He has completely memorized the teachings of Sri Svarupa Damodar Goswami.” (Jaiva Dharma)

From the time of Gopal Guru, Kashi Mishra’s house was known as Radhakanta Math. During Kashi Mishra’s lifetime, there was only a single deity of Krishna. From the time of Gopal Guru, a deity of Radha was placed at Radhakanta’s left side and a deity of Lalita on his right. Deities of Gauranga and Nityananda were also installed. The temple buildings were repaired and enlarged during this time, between 1538 and 1548 AD.
In the Orissan language a small separate room situated on temple grounds is given the name gambhira. Bhaktivinoda Thakur has written, “In the customary architecture of a temple in Orissa, the deity room itself has a verandah (alinda) facing it. Facing the verandah is a paved and covered area known as the dalana. A small room within this area is given the name gambhira.” The Gambhira at Kashi Mishra’s house marks the place where Mahaprabhu performed his meditation and where he slept. From the time of Gopal Guru, Mahaprabhu’s wooden shoes and a quilt which was made either by Svarupa Damodar Goswami or Jagadananda Pandit are kept and worshiped in the Gambhira. There is also a waterpot made of clay from the Vraja area which was formerly used by Mahaprabhu. There is also a wooden waterpot which was put there in later times.
From Bhakti-ratnakara we learn that Narottama Das Thakur met Gopal Guru when he visited Puri.

A few legends of miraculous events are told about Gopal Guru. When he started to grow old, he turned the responsibility for the Radhakanta Math over to his disciple Dhyanacandra. When Gopal Guru died not long after, his successor was overcome with grief. He took his guru’s body to the Svarga-dvara (“The gate to heaven”) on the seafront. In the meantime, some representatives of a government department blocked off the temple, claiming that the transferal had been done without ministerial sanction. When Dhyanacandra heard that this was going on, he fell at the lotus feet of his guru’s body, tears flowing from his eyes. Though Gopal Guru’s body was on the funeral pyre, the prayers of his dear disciple reached him and he was resuscitated, chanting the Holy Names in sankirtan.

As soon as the government representatives heard of this event, they became fearful and abandoned their effort to take over the temple. Gopal Guru returned to the temple and make a properly legal transfer of ownership to his disciple and disappeared some time later on the Karttik Sukla Navami.

A year after Gopal Guru disappeared, when some devotees who had made the trip to Puri for the Rathayatra returned to Vraja, they were amazed to see Gopal Guru sitting chanting japa under a Pakura tree in Vamsi-bata. They sent the message to Dhyanacandra in Puri and he immediately hurried to Vrindavan to see his guru. He fell down at his feet and begged to be allowed to stay in Vraja, even though Gopal Guru told him to go back to Puri and take care of his responsibilities. Finally Gopal told Dhyanacandra, “If you feel such separation from me that you are unable to tolerate it, then have an image of me made out of a neem tree and place it in front of the altar room of the temple and worship it.” This is what was done and the statue of Gopal Guru Goswami is worshiped at the Radhakanta Math to this day.

The following kirtan is sung on Gopal Guru’s disappearance day.

1. O Gopal Guru, you are my devotional desire tree. Your name was previously Makaradhvaja, but Sri Krishna Chaitanya called you Gopal because your behavior as a child reminded him of Gopal Krishna.

2. You were alway absorbed in the joy of serving Gauranga; indeed you knew nothing other than him. You could not tolerate being separated from the Lord for even a moment; it was as if Gora was Gopal’s very life.

3. One day, Gopal taught some devotional practices to a child. The Lord was so ecstatic that he said to everyone, from today on, I will call Gopal, “guru”.

4. Tears filled the devotees’ eyes when they saw how merciful the Lord was to Gopal; it was as though the ocean of joy was overflowing. Everyone said that the name Gopal Guru was extraordinary, and as it was given by the Lord, it soon spread throughout the world.

5. I am incapable of describing Gopal’s devotion to his guru, Vakresvara, who was always satisfied with him. No one can compare to Gopal Guru who was always intoxicated in singing his own devotional songs and whose appearance was attractive to everyone.

6. Everyone recognized that there was no one as merciful as he. Who in the world did not sing his glories? He made everyone worthy of loving ecstasy, only I, Narahari, have been deprived because of my own misdeeds.