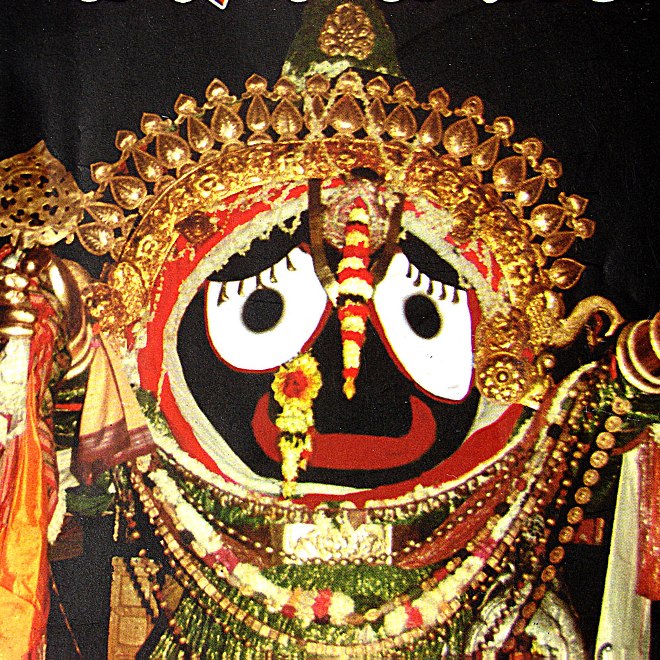 By the causeless mercy of Sri Sri Guru and Gauranga, jiva, a soul, who has gone through endless meaningless reincarnations in this material world, receives the opportunity to visit a holy dhama, a sacred place where God’s pastimes took place.

Jagannatha Puri is one of such special places. It is called Sri Ksetra which means “The residence of Sri” - Laksmi Devi, and also Sankha Ksetra. Just as Vrindavan and Navadvipa have a shape like a lotus flower, Puri Dhama has a shape like a sankh - conch shell. The shell mouth - a hole we blow in, is an entrance to Sri Ksetra - Bhubaneswar, a city protected by Bhubaneswar-Lingaraj. The blue mountain called Niladri or Nilacal is situated in the centre of Puri Dhama. That’s why sometimes Puri is called Nilacal. On the peak of this mountain there is a temple called Sri Mandir of Sri Jagannatha Dev. 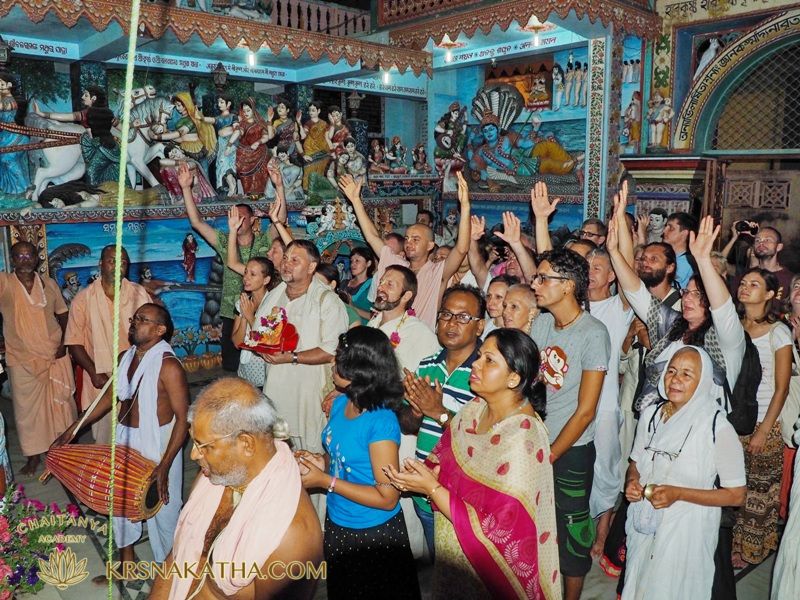 This holy dhama by no means is a part of this material world. It appears like this only for our material senses. What happens is that Bimala-devi, who is Yoga-maya of Jagannatha Puri, covers the transcendental dhama with illusion. That’s why there is a big difference between residing in dhama and living on its outer covering. Some reside in Sri Ksetra Dhama and some can only live on its covering, not touching the dhama itself. If a person is in a humble mood, very soon he will go through the illusory covering of Bimala-devi and will end up in the dhama itself.

How will the Dhama appear to that person?

Some people think that Jagannatha Puri is non different from Vrindavan. However, our spiritual masters, acaryas of Gaudiya vaisnavism say that it is Navadvipa and Vrindavan that are non different from each other. Srila Gurudeva explains that Puri Dhama is a prakash, manifestation of Dwaraka. The initial Dwaraka of spiritual world was located in the middle of the ocean in the other part of India. The Supreme God in a form of Sri Jagannatha Deva is eternally residing here, in Jagannatha Puri, together with Subhadra and Baladeva Prabhu. This place can’t be Vrindavan because Subhadra is Krishna’s sister, her parents are Devaki and Vasudev Maharaj.
However, despite that Jagannatha Puri is not Vrindavan, when Mahaprabhu saw Chatak Parvat, he thought it was Govardhan, when he saw the ocean, he thought it was Yamuna and rushed towards it. Thus, we see that Caitanya Mahaprabhu saw Vrindavan in Jagannatha Puri, that’s why many people think it’s Vrindavan.

Srila Krishnadas Kaviraj Gosvami wrote - vana dekhi’ bhrama haya - ey “vrindhavana”. Bhrama means - to be bewildered, by mistake - Mahaprabhu thought this place was the forest of Vrindavan. It indicates that Sri Caitanya Mahaprabhu through the eyes of his bhav felt that this mountain is Govardhan, this ocean is Yamuna, this forest is Vrindavan. After all, Jagannatha Puri is a prakash, manifestation of Dwaraka. 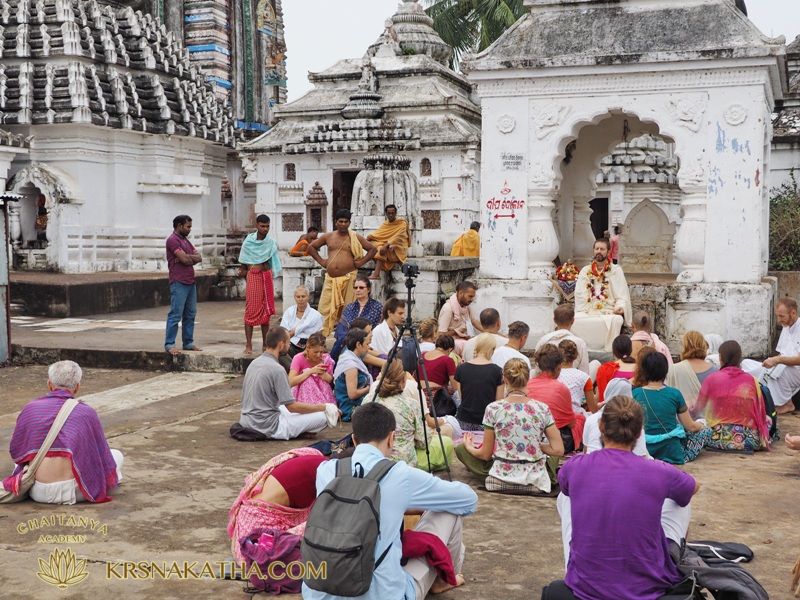 We should emphasize that when Caitanya Mahaprabhu was in Jagannatha Puri he also remembered Krishna’s pastimes in Dwaraka. Sometimes in Gambhira he would remember mahishi-gita, the song of the Dwaraka queens, wives of Krishna. It is described at the end of 10th canto of Srimad Bhagavatam. Even though the last pastimes of Krishna in Dwaraka ended up in a complete disappearance of his dynasty, Sukadev Goswami doesn’t mention it in the 10th canto. Each canto of Srimad Bhagavatam is a part of swarupa, spiritual form of Sri Krishna and the 10th canto is his smiling lotus-like face. Thus, at the end of 10th canto of Srimad Bhagavatam we find mahishi-gita, 10 chants spoken by mahishis, queens of Dwaraka. Krishna is in the magnificent city of Dwaraka, with splendid houses, ponds with steps that go to crystal-clear water with fragrant lotuses on the surface and bumblebees humming around. There Sri Krishna together with Rukmini, Satyabhama and other queens and their maidservants enter in one of the lakes and start playing in the waters. Krishna holds a pichkari, sort of a squirt gun they use in the Holi festival. Krishna takes water in his sprayer and splashes water on queens of Dwaraka. Sometimes mahishis would run to Krishna and start struggling with him to take away his pichkari. In reality they don’t actually want to snatch the pichkari, it is an excuse to embrace him. In this way they laugh, splash, embrace each other during their “fight” and their hearts become filled with joy.

During this scene, queens experience such strong ecstatic emotions - sattvika-bhava - that at some moment they just become stunned and not being able to move like still images on the painting. They start to drown in the overwhelming waves of their deep ocean of love to Sri Krishna. It is called prem-vaichitya - a state that indicates a strong and deep attachment to the lover, the need to be with him and serve him every second. This feeling is so strong that the heart is pierced with understanding that those moments won’t last forever, but for a short period of time and the joy of meeting won’t be long. Then the fear of inevitable separation overwhelms the heroine and she completely loses the sense of reality and can think only where Krishna has gone. She doesn’t even understand that she is right next to her lover. It is called vichitra-vilas, an amazing diversity of feelings, mahabhava of radja-mahishi. 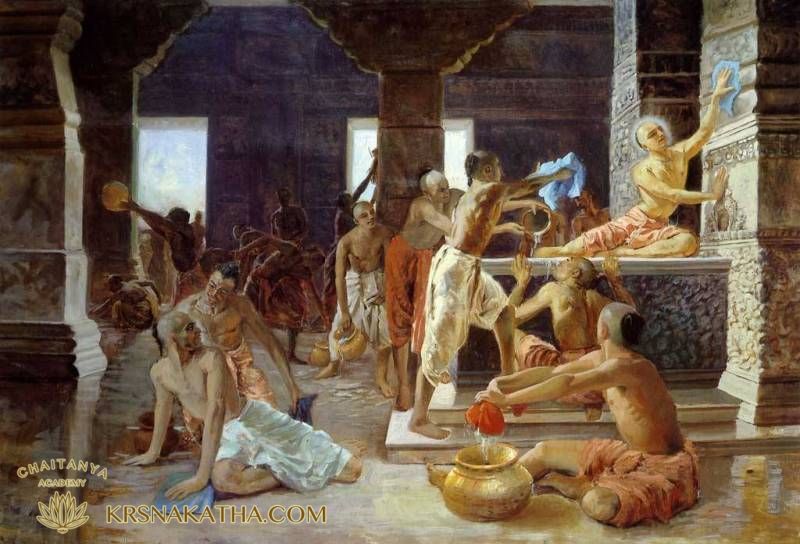 This lila is a small hint, a small drop of the great ocean that can be revealed in the heart of the devotee who dedicated his life to serving Sri Guru and under his guidance is doing parikrama to holy places such as mysterious and beautiful city of Sri Jagannatha Puri. Sri Puri Dhama is a place of the supreme separation shown to us by Lord Caitanya, especially in his Gambhir period.

When Krishna left Vrindavan, Srimati Radharani felt intolerable pain of separation, and when he finally returned and the meeting took place, Sri Krishna was overwhelmed with immense ecstatic feelings and he transformed entirely. When he saw Srimati Radharani, his eyes became round, his hands and legs pulled in and he manifested a form of the Lord Jagannath. Thousands of intimate mysteries pervade this miraculous place, for example the annual festival of Rathayatra. Only those lucky souls who are listening to the nectar stories of Srimad Bhagavatam and following the footsteps of their spiritual masters can get an insight into this innermost truth. 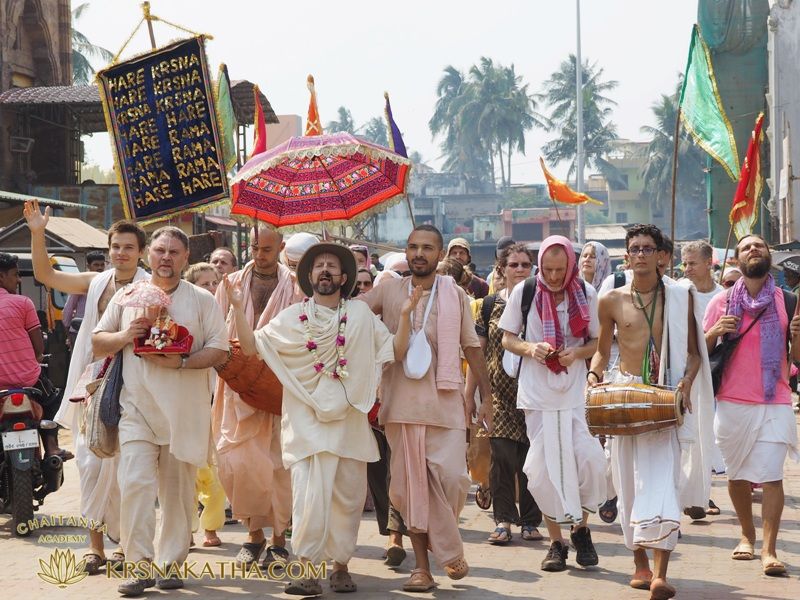 Meanwhile we invite you to our annual Sri Jagannatha Puri parikrama to become absorbed in this wonderful world! Radhe-Shyam!