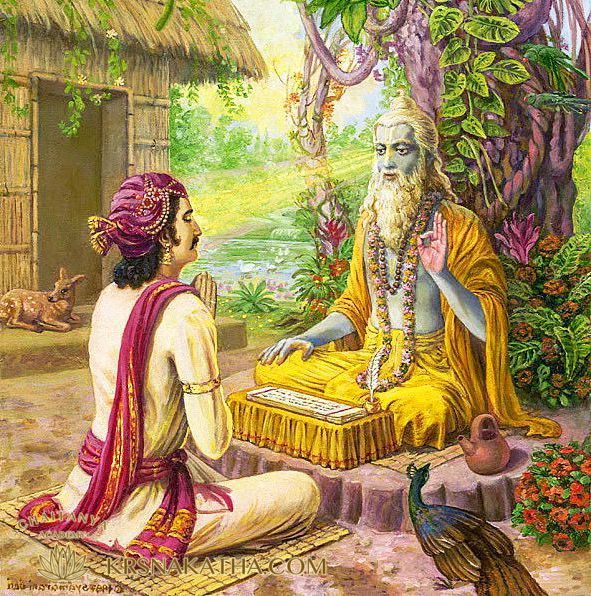 Many people have various teachers, various Gurus. But every Guru is a spiritual master only because he is representing Srila Vyasadev, the author of the Vedas, Vedanta, Upanishads and so on.

A true spiritual master, sad-guru, transfers knowledge to a true disciple, sad-shishya, and the latter realizes his spiritual form and relations with the Supreme Absolute Reality Sri Krishna. Asana, the place upon which Guru is seated, is called a seat of Vyasadev or a vyasasana. This is why any Guru is a representative of Srila Vyasadev. He sits on the vyasasana in order to transmit to his disciples the knowledge of the Vedas and of the Srimad Bhagavatam. In our Brahma-madhva-gaudiya sampradaya Guru does not only represent Vyasa; he is also a representative of Sri Chaitanya Mahaprabhu and Srila Rupa Gosvami.

The holiday of Vyasa-puja is one of the most honored days in the Vedic culture. On this day every disciple expresses his obeisance and gratitude to his Spiritual Master.

The story of emergence of Vyasa-puja goes back in time to the creation of the world. At first, Srila Vyasadev divided the one Veda into different parts and presented its essence in Vedanta-sutra. Afterwards he composed Puranas and Mahabharata, however, he didn’t feel satisfaction in his heart. Finally, following the order of his Spiritual Master Sri Narada Muni, Vyasadev described the pastimes of Sri Krishna in Srimad Bhagavatam and transmitted this knowledge onto Srila Shukadeva Gosvami. 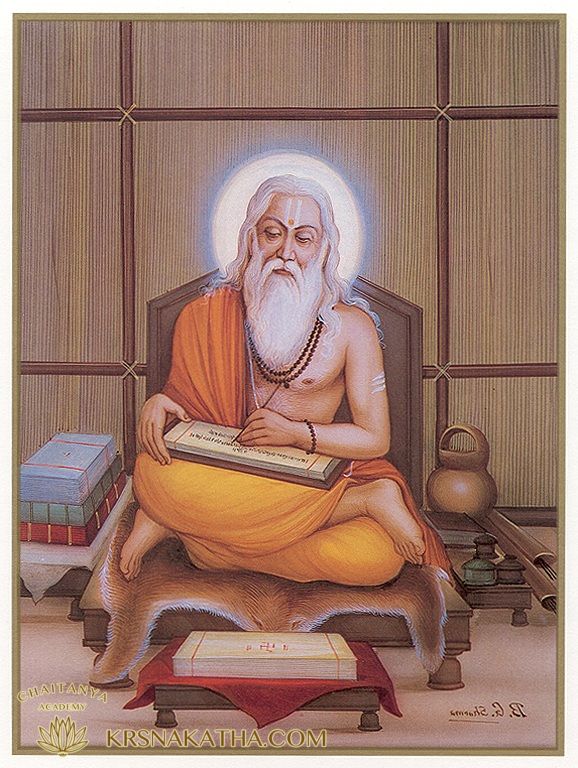 Why do we honour Sri Gurudev? Why do we serve Sri Krishna? We express our reverence to the personality who is helping us in our spiritual development.

Sri Guru himself feels indebted to his Gurudev and guru-parampara (disciplic succession coming from spiritual master to disciple). If there was no Guru, no guru-parampara, no Sri Chaitanya Mahaprabhu, no Sri Krishna – what destiny would await us? Nothing. Without them, it is impossible to attain spiritual development.

In Shvetashvatara-upanishad 6.23 it is said:

“Only to those great souls whose hearts are filled with unshakable faith in the Lord and in the Spiritual Master, all the knowledge of the Vedas is revealed immediately.” 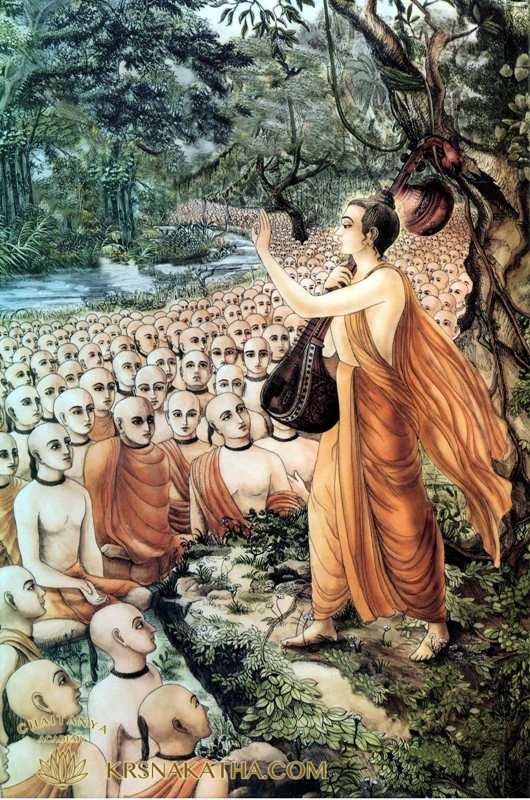 In one of the Upanishads there is a story of a Spiritual Master and his disciple Aruni. Guru decided to test Aruni’s devotion and once, late at night, he told him: “It got dark and it is raining. At once go to the field.”

The field was far, it was raining heavily and it the weather was very cold. In addition to this, Aruni had no umbrella and no other shelter. Yet Gurudev gave him a shovel and ordered: “Collect water for the rice in the field and fortify the dam so that the water cannot leak to other fields.”

Despite the rain, piercing cold and impenetrable darkness, Aruni went to the field. The dam was broken, and the water couldn’t stay at the field. Aruni took the shovel and began to make a mound to contain the flowing water. However, the mound couldn’t stay in place. The rain was so strong that all the pile of land built by Aruni was immediately washed off by the streams of water.

He began to lament: “I did not complete the task, so I cannot return to Gurudev.” After some thought, Aruni lied himself along the dam in order to contain some water in the field. During the night, he became completely stiff.

In the morning Gurudev saw that Aruni had not returned. He became worried: “Where is Aruni? I sent him to check the water but he is still not here.”

Then he went to the field himself and started to call: “Aruni! Where are you? what are you doing there?”

Aruni who was barely alive replied in a weak voice: “Gurudev, I am here.” Upon seeing Aruni, Gurudev took him by the hand and said: “Get up.” He gave a plaid to Aruni and hugged him saying: “You passed the challenge. I bless you. Let all the knowledge of the Vedas reveal in your heart.”

At the same moment a miracle happened! By the blessing of Gurudev the knowledge of the Vedas appeared in Aruni’s heart and he realized all the transcendental truths. That was the test of the “harsh” Gurudev who in reality was very soft.

Mantra-guru is an embodiment of Krishna-rupa – or a direct manifestation of the Lord. Sri Guru is the form of Krishna in which He comes to bestow mercy upon His devotees.

On the Vyasa-puja day, every disciple endeavours to remember his Spiritual Master, especially, his moods, bhavas, his teachings and the deep and confidential knowledge that Gurudev mercifully shares with us. We try to feel gratitude for everything that our Spiritual Master has done for us, for all the love and care that he has showered on us by his association. This is the essence of bhajan, the spiritual practice: laukik-sat-bandhu-vat-sambandha – we remember our natural, family-like relationship with our Spiritual Master.

The more we serve our Spiritual Master, the softer our heart becomes, the more we feel separation from Sri Radha and Krishna. Like this, gradually, gradually we come to understand that the mercy of Sri Guru and the service to Sri Guru are non-different from each other.

With great exaltation every year we honour this holiday of Sri Vyasa-puja and pray to always be in association with the one who does not need anything in the world except for love and service to the Lord – with Sri Guru! 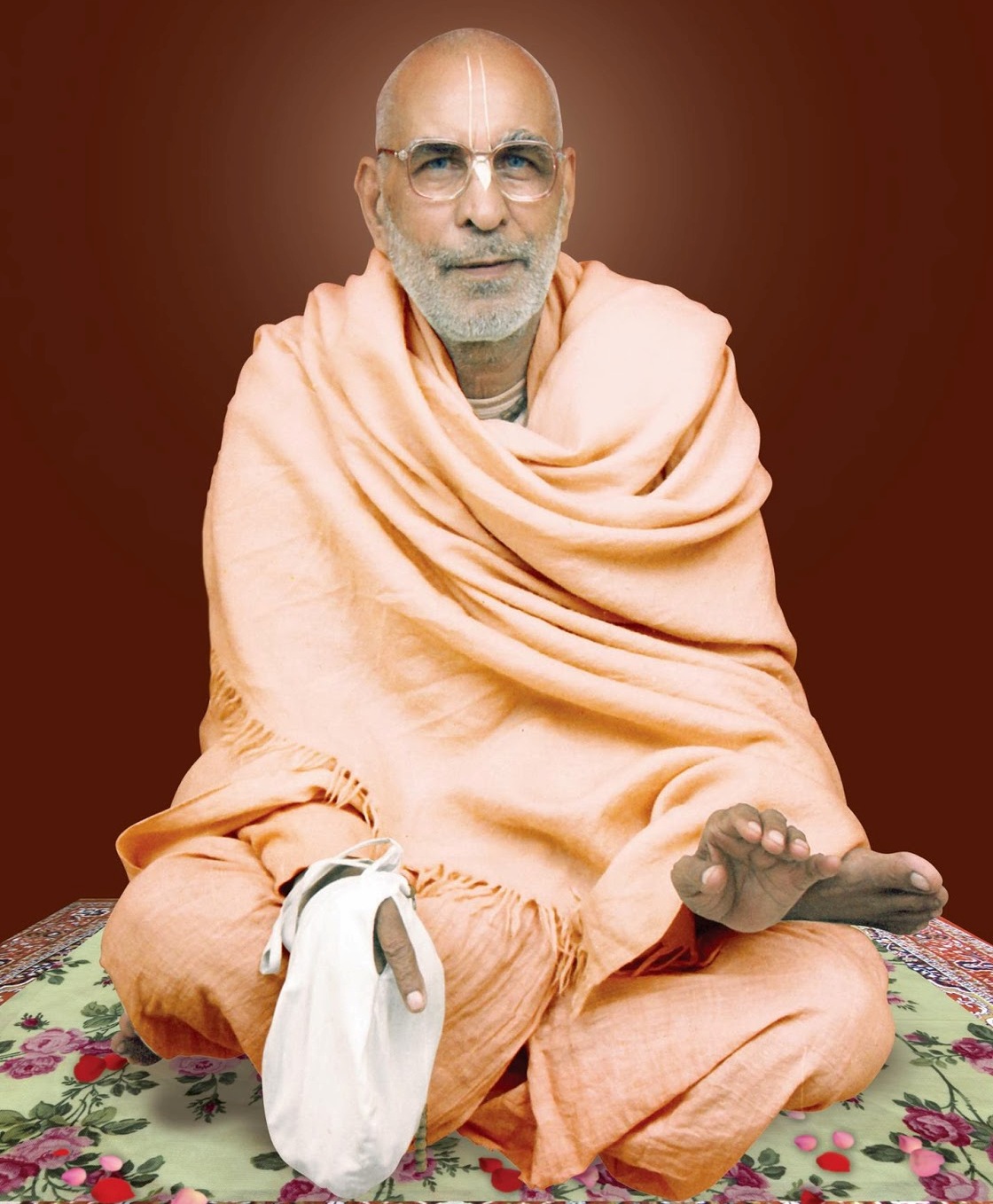 All glories to Sri Sri Guru and Gauranga!